Estuary Fishing on the Capricorn Coast and Rockhampton Region

It would take a lifetime to cover all the estuary fishing the Rockhampton and Capricorn Coasts have on offer. And we’re well on the way to achieving that!

Most estuaries in this region are sheltered in the lee of one of a multitude of islands. And that means they’re readily fishable, even when conditions are blustery outside.

The Fitzroy provide some of the best estuary fishing available anywhere, with a smorgasbord of species to target. Newcomers to the area can quickly become overwhelmed by the options…. few other locations can boast comparable estuary fishing.

Best of all, you don’t need a large boat to get the most out of this area. There’s always somewhere to fish around or behind the islands, with plenty of shore based options as well.

Need help and want to know more about our Fishing Charters?
Call Guided Fishing DownUnder for assistance on  (mobile) 0400 221 055 or send us an email via our online form and we can call you.

Request a call back from Guided Fishing DownUnder

Estuary Species Of The Fitzroy, Rockhampton And Capricorn Regions

Most of our estuary fishing with clients focuses on two main species: Barramundi and threadfin salmon. Obviously these are the coveted trophies that win bragging rights at the local watering hole.

But the bycatch can often be as good as the target species! Throw in javelin, queenfish, jew, fingermark, blue threadfin various trevallies and many other tropical species and you’re in estuary fishing paradise.

And those who love targeting the bread and butter species (and who doesn’t) are in for a treat too. Silver and pikey bream, whiting and flathead might be less glamorous than tropical species. But these fish don’t get as much pressure in this area as they do down south. So you’ll find they’re plentiful and very willing. 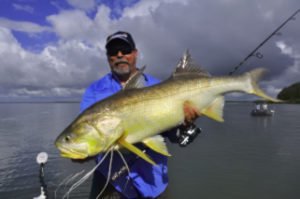 When To Go Estuary Fishing

There’s always something to chase in the Rockhampton, Fitzroy River and Capricorn Estuaries, all year around.

During the cooler months the water is clear and the weather is fine. That’s when to focus on the bread and butter species. Silver and pikey bream, whiting and flathead provide plenty of entertainment at those times.

This part of Queensland gets most of it’s rain over the warmer months. That coincides with big tides, prawn runs and warm temperatures that get the barra, threadfin, javelin, queenies and various trevallies excited – but mind the closed season on barramundi! 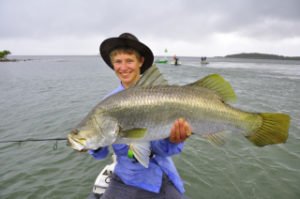 There are plenty of options with the bread and butter species where a 6-8wt could be used with the same flies that work for these species in the south.

However, most fly anglers that travel to Central Queensland are chasing more exotic species. Generally speaking a 9 – 10wt will cover most estuary fishing situations in this region, including the two prime targets – barramundi and threadfin salmon.

Bring a variety of flies from small gotchas, fuzzle buggers, shrimps for the smaller species. The standard flies for barra and threadies include Pink Things, Black and Barreds, Whistler, Gustos and Crease flies in various different weights.

Floating, intermediate and sink tip lines will cover most estuary fishing situations. A fast sink could also be included if you’re fishing in deeper water. If I had to choose one line to cover the lot it would be an intermediate.

Both spin and baitcast rods and reels can be used, considering its such a vast area and the number of species you can catch, anything from light 4kg to 15kg, with species from whiting through to mega barra, threadfin and mulloway being targeted.

Standard tackle used in southern estuary fishing is often times a little light in the Central Queensland area. Beef it up a bit for the whiting and bream, and beef it up a whole lot more for the barra and threadies!

Nathan’s Top 5 Tips For Estuary Fishing In The Rockhampton, Fitzroy and Capricorn Region